The Children's Choir of the Ukrainian Radio 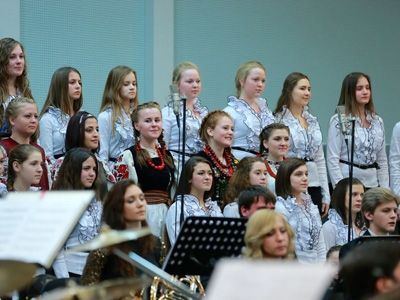 The Children's Choir of the Ukrainian Radio was established in 1980. It consists of two age groups: junior -from 6 to 10 and senior- from 11 to 16. The Choir's specific feature is making recordings for the "golden" fund of the Ukrainian radio.

Over the whole its history the Choir has added to the recordings collection of the Ukrainian radio a number of interesting recordings of compositions by the Ukrainian contemporary composers, among them: L. Dychko, B. Filts, Zh. Kolodub, V.Stepurko, V. Shapovalenko, Yu. Alzhnyev, V. Ptushkin, I. Shcherbakov, I. Kyrylina. The recording of a cycle of Ukrainian folk songs in the arrangement of M. Leontovych, K. Stetsenko, M. Lysenko, performed by sonorous crystal-clear children's voices, got to become a true gem of the National Ukrainian radio recordings collection. Widely represented in the Choir's repertoire is the world classical music- J.S. Bach, H.F. Hendel, J. Pergolezzi, S. Rachmaninov and others. A separate page in the Choir's artistic biography is dedicated to the recordings made by the Choir with the leading Ukrainian singers D. Hnatyuk, A. Mokrenko, S. Rotaru, O. Harkavy, V. Bokoch, A. Kudlai, V. Turets.

The Children's Choir is always welcome at the best concert halls of Kyiv: National Philharmonic Society, "Ukraina" palace, National opera house. The Choir is a regular participant in the recitals of the known Ukrainian composers, in "Man of the Year", "Golden fortune" events, yearly New Year entertainment performances and other cultural and artistic events that are held in the Ukrainian capital.

The Children's Choir is a prize-winner of the international contest-festival "Stars of Artek", for several times it participated in the Choirs contests, organized by the European Broadcasting Union (EBU), it is a regular attendant at the metropolitan Club of choirmasters "Tonika".

Recently the touring schedule of the Children's Choir got enlarged by a number of cities of Ukraine,  Yugoslavia, France.

The Choir's artistic director and chief conductor is Merited artist of Ukraine Tatyana Kopylova who has been maintaining this position since the time the Choir was established.